I’m incredibly flattered to have been featured in Salt Magazine‘s article “Erik Lindström Talks Inclusivity in the Hair World” by Miranda Moses! I had an absolute blast discussing some of my most passionate topics with an incredible journalist over brunch at Lucile’s Creole Cafe (shameless plug because you never know who will read this and hook me up with free food :p ). Please check out it out!! 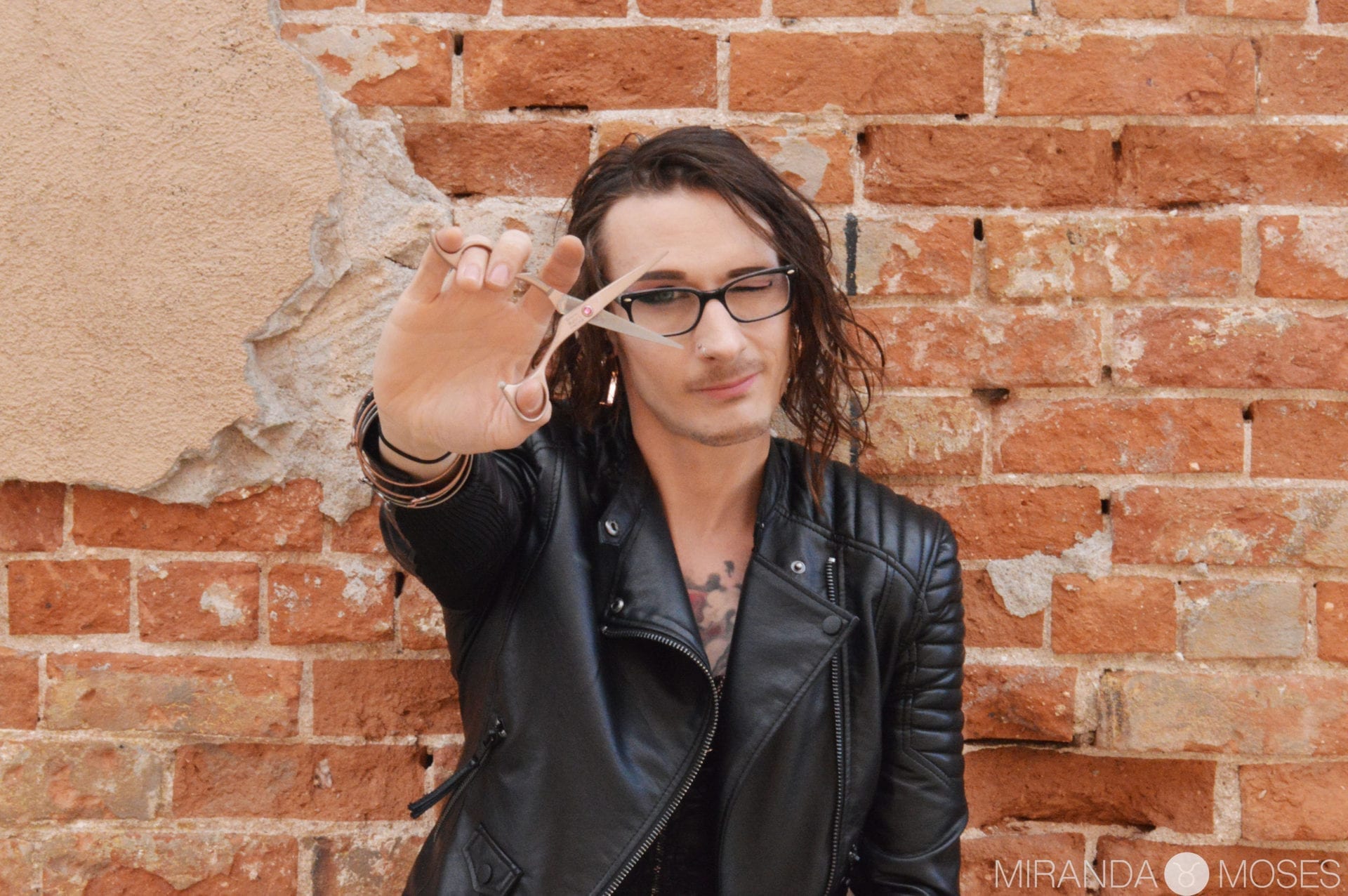 Self expression often has a tie to the queer experience, whether it be an act of resiliency and self-truth through the arts or protest or making efforts towards an outward manifestation that reflects how one feels inwardly. From fashion to physique, outward articulations of the self intersect deeply with identity and can be used to combat dysphoria and disrupted access to righteous self-embodiment. To be comfortable in our own skin can be a radical act, especially if we hold marginalized identities in the face of systems and people who seek to make us feel othered, unsafe, and unwelcomed. Access to this right must be framed as inherent to the human experience. People like Erik Lindström at VOLTAGE Salon are reinventing daily practices to make this reality.Erik is a hairstylist and Fort Collins business owner with an eclectic business model that puts breaking binaries and ensuring the comfort, safety, and desires of his clients at the forefront. Originally on the academic journey towards becoming a civil rights lawyer, Erik–disillusioned by his ability to make an impact–dropped out of Colorado State University his senior year and began a different path towards creating. After working for a year in a commissioned salon chain in town, the stylist walked away from the experience with the intent to establish a re-envisioned practice that opened space for LGBTQ+ individuals to feel valid and adequately serve everyone across the gender spectrum.

During his year in the aforementioned salon, Erik and his coworkers would cut and dye each other’s hair. Due to the established relationship between the stylists and himself, he felt comfortable asking his friends and coworkers to break out of the heavily-gendered way they were taught to style hair, but he knew this ability was a unique circumstance.

“That got me thinking—What do you do when your stylist isn’t your friend and you’re not comfortable saying, ‘No, don’t listen to what you’re taught. Cut it like this, cut it like that,’” Erik said. “And that thought process just kind of expanded to thinking about where do people go when they want something a little more outside of the gender binary and where do people go when they’re trans? And the answer was nowhere.”

Intentionally inclusive hairstyling establishments come few and far between, especially outside the fashion capitals of the world. The historical partition between salons and barbershops, as well as problematic tropes of the ‘gay-best friend’ hairstylist helping white women attract men, estranges LGBTQ+ customers who don’t fit into heteronormative categories of expression from having agency over their appearance in the way that straight, gender-conforming, cis people do. In a social landscape that attempts to eradicate queer agency, this kind of control over our own bodies is vital.

Erik, in efforts to be as trans and non-binary inclusive as possible, has closely studied how to style hair in a way that gives clients the ability to present fluidly and confidently. Two years ago, the artist produced a project that displays side-by-side photographs of models sporting the same haircut styled in both traditionally feminine and masculine ways. Not all of Erik’s clients opt for this kind of hairstyle, but he describes the intent behind this particular shoot as one that acknowledges various stages of transition as well as the very real need for safety. From a sociological perspective, Erik admits that he hates that conforming to traditional gender standards is a need, but in some circumstances, it is a necessary survival tactic.

Erik’s website reads: “This is a collection about gender fluidity and versatility, showing how hair can be cut to accommodate a spectrum of fluctuating gender presentations. It’s something that I’ve been passionate about since I started doing hair, and I’ve made it a major part of my business behind the chair to bring more accessibility to the queer community by creating hairstyles that can be styled masculine, feminine, neither, or anything in-between… Some of the styles are inherently and deliberately androgynous no matter how they’re worn, while others are cut for the versatility of wearing it very much one way or the other (or of course, anything in-between!), which is particularly useful for those who are transitioning or are genderfluid.”

Erik himself is non-binary and gender fluid with no dictation of his own pronouns. Being a part of the fashion and make-up industry, he says, helped him come into his own in terms of presentation. In person, he is a colorful collection of gender expression and artistic passion; sporting an asymmetrical bob, a mass of lively tattoos, and immaculate shoes from his collection of forty, it is clear that he is an artist who defies being narrowly pinpointed.

“I completely respect other people’s pronouns, I’m not saying I don’t value it, but it’s never been a source of dysphoria for me,” Erik said. “Most people default to ‘he, him, his,’ because I’m not a cis dude, but I refer to myself as a dude. I have a beard most of the time. Erik is a typical ‘male’ name. I on paper look ‘male.’ When people default to ‘they, them,’ I always smile, because I’m like, ‘Oh shit, you’re hip with gender politics. I like that.’ Or when they ask pronouns, it’s the same thing. People use ‘she, her,’ and I feel cute. But it’s not something that has been any source of anything for me…This is sad, but I don’t focus nearly as much on how I’m read by other people as much as what I see when I look in the mirror. That’s where all the issues that I’ve struggled with came from.”

Erik sees a lot of people conflate body dysphoria with body dysmorphia. He described that dysmorphia causes people to look in the mirror and see a misconstrued image cultivated in their minds, something that Erik has witnessed many queer people being labeled. The distinction, he describes, is that many LGBTQ+ are seeing what is actually in the mirror, but that is not the reflection that they want for themselves or what they see as truthful to themselves, hence the dysphoria.

“I think a lot of people when they look in the mirror and they don’t see the person that they see inside, they go to major facial features and stuff like that, but hair is a big thing that can either make or break that aesthetic,” Erik described. “Even when I do full make-up on myself, I’ll be like, ‘Eh, I look the same,’ and then I put on a wig and I’m like, ‘Oh shit.’ It does make a difference across the board for presentation in general and I think a lot of people start to get excited to play with their hair when they start to play with gender variance or cross-dressing or transition.”

Erik has a lot of clientele that don’t require his gender variant skills but appreciate having an environment in which they can safely be their identity and receive a service at an accessible and non-discriminatory price. His prices are not dictated by sex or gender but by the service, and Erik has worked hard to make sure his services are available to as many people as possible.

“I have a lot of gay and lesbian clients that say, ‘I don’t need androgyny,’ or, ‘I want a men’s style,’ or ‘I want a women’s style, but I like going into a business and saying the gender of my partner,’” Erik said. “I think that’s an important model in any business, even if you don’t specialize in it, to make a point to show that you’re a safe place for marginalized people, especially in a town like this where it’s so white bread. It becomes really difficult to know whether anywhere you’re going is a safe place because you don’t see other people like you if you’re any sort of ‘other’ walking around.”

In addition to being a conscious outlier in terms of how the industry treats gender and queer individuals, Erik is also critical of how people of color have to struggle to find someone with knowledge about their needs and someone who, quite literally, won’t white-wash their hair in Fort Collins. According to the stylist, much of the normativity of white hair within professional salons can be chalked up to the whiteness and the institutional racism of the professional product world, which in turn causes professional salons and their students to be without hair products and education that serve people who have hair textures that fall outside the realm of traditional white texture. Black clientele could be dually isolated by their race and their queerness. Erik finds this frustrating and recently introduced the Denver-based, black-owned, female-owned, product line Chubby Curls into his salon to provide more inclusive cuts.

“A big part of building my business the way that I have is not only being diverse in the way that I am accepting of a large clientele but also not segregating them within my own product and business market,” Erik said. “A lot of my black model friends will mention to me, ‘My hair is trashed every Denver Fashion Week. They ruined my hair because they used a 400-degree iron, frying my hair, because they don’t realize that because I have this thick curl texture, but my hair isn’t thick, it’s fine.’ There’re so many instances like this. Aside from the damage it does, it’s not okay. It’s not good enough to just settle, like, ‘Use this white girl product and make it work.’ We don’t just make it work. I won’t just make it work. That’s what my business is focused around: treating everyone how they need to be treated, specific to them. That’s why brought this product line in.”

In addition to running his own business in Voltage Salon, Erik also spends time collaborating with other fashion artists styling for Denver Fashion Week and devising creative photography and modeling projects. Right now, Erik is working on the biggest project he has produced thus far, encompassing ten models and a six-person hair and makeup team. All the models are black models, and the goal of the project is to showcase the diversity of skin tone and hair textures within the black community. The message, he says, is that black is beautiful, and the beauty doesn’t all look the same.

“We’re going to talk a lot about the professionalism of the industry, the segregation that’s inherently there, and the way that we look at black hair as one single thing in this culture, and how that’s fucked up,” Erik said.

When I asked if Erik sees what he does, whether it be creative projects or serving a client who has never had assured access to a haircut that validates their identity, as inherently political, he let out a deep sigh.

“I just know that everything I do tends to have a bit of a political edge to it,” Erik said. “I have references in my bio about how much diversity means to me. That exposes you to so many different things, it just influences you in every single way. I think that, to an extent, it’s a major function of my business, and I guess that is political to an extent because we live in a strange time now when people’s human rights are a matter of fucking politics. I don’t necessarily think it should be a political thing, I don’t think I should have a political existence by offering services to trans people and thinking that black products shouldn’t be completely segregated, but apparently that’s a political opinion right now.”